I bet everyone who is reading this is wondering how did this unique and thrilling trio become a thing? Why are we so perfectly fit for one another? Well, we decided to all hop on a Google Doc and each give our perspective on each of our friendships and our tri-pod as a whole. We each gave commentary and this became our first: Stop. Collaborate and Listen.

Let’s just start off by saying:

Kristen is the reason we’re all friends. End of story.

Kristen and Pam met on a warm summer afternoon, during orientation for their school’s newspaper. Pam was a wee freshman in college, high off orientation and school pride, not really certain how to approach these “cooler, old kids.” (Kristen: did she just f*cking call me old?) (Pam: YOU BET I DID.) Lucky for her, Kristen was eager to take Pam under her wing and started asking about things the two would have in common.

It all started when Kristen asked Pam to go to some frat football game (Pam: who cares..), from there they both found out they listened to some of the same bands and watched some of the same shows! This would spark many visits to Pam’s dorm while Kristen was on campus and visits from Pam to Kristen’s ~off campus apartment!~ (Pam: This was a big deal for me because I’d never been to an off campus apartment okay.) (Kristen: Guys, she was skipping to my apartment. She was like a kid in a freaking candy store)
Our friendship is as sweet and pure as cane sugar and I know I will always have Kristen to call and rant about something dumb going on in my life. The Leslie to my Anne, Tom to my Donna, Bruce Banner to my Tony Stark. We RUN THIS TOWN. It was pretty much destiny that we would get along so well.

SXSW. The greatest festival in the world started this beautiful friendship. Kristen’s quirky sense of humor and love for music fell into my lap and I couldn’t be happier. Let’s just talk about how she met Nick Jonas one block over from me and only communicated in the walkie (what sounded like pig-latin) shouts of “NJ! NJ! NJ!” –still bitter about this one K. (Kristen: I WAS TRYING TO BE DISCREET) (Ale: Riiiiiight.) This friendship continued with random meet ups in Houston, Austin and San Antonio with a mutual love for Mayday Parade and beanies. Her (drunk)(Kristen: read: feeling good) dance skills make my heart happy and I will never forget the drunken serenading of “Stay” on top of a picnic table on Valentines’ Day 3 (or was it 4) years ago (Kristen: I would like to add that it went perfectly with the light show) (Ale: I agree, the whole performance was that of a wonderful broadway production, lights and all).  I have to say Pam is the reason we are as close as we are now. I am forever grateful for this thing we got going (weird-random sing-a-longs included). (Pam: I will always take full credit for this. You’re welcome.) (Ale: Get out Pam). 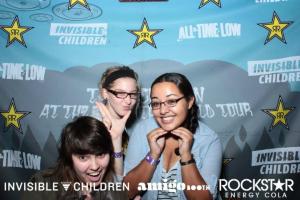 Pam and Ale met on a hot summer afternoon (I think a year after meeting Kristen actually..) at our local Cracker Barrel thanks to Kristen. We all had gone to eat with our mutual friend Christina and we definitely hit it off right away. One thing I distinctly remember about meeting Ale is that she bounced off my ideas and within 45 minutes of knowing me, immediately accepted to start a Supernatural fan club that would meet weekly to discuss the latest episode. (Pam: This never happened, but it’s the thought that counts.)(Ale: OH MY GOODNESS. Totally forgot about that! Why has this not happened…? I think a TGW weekly meet up is way better now)

Then Ale and Pam happened to go to a couple of impromptu shows together for a week straight and there a sweet friendship full of puns and TV talk was born. A mythology class and puppy sitting semester later, the two were destined to be friends forevaa. With our backgrounds of Mexican and Italian culture, it’s easy for us to talk at all times (Pam: sometimes in loud voices) (Ale: Always loud voices. And obnoxious hand gestures) and we mutually have a great understanding for food (Ale: Kerbey. All the Kerbey).

From Pumpkin Spice lattes to pop culture references, we never run out of things to talk about! It’s easy for us to bounce ideas and jokes off each other.
Also, I’d like to personally take this moment to thank Ale for introducing me to the Gilmore Girls. (Ale: You’re forever welcome and indebted to me. I OWN YOU. Just playin’) I’m so happy I know about this show. Where Ale leads, I will follow. ANYWHERE THAT YOU TELL ME TO. (Ale: IF YOU NEED ME TO BE WITH YOU, I WILL FOLLOW.) 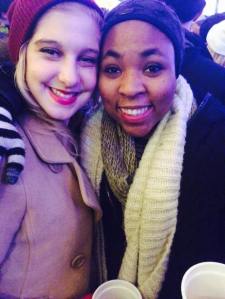 I have vague memories of meeting Ale at some shows in Houston. For awhile people knew me as “the girl with the clipboard” because I used to go around shows asking people if they wanted to join the street team. And we have a mutual friend that I used to see at shows quite often. But Ales right, we didn’t really say more than a few words to each other until we met at SXSW. Anyone who can appreciate the moves I throw down at any given moment is ace in my book, but Ale IS ON THE DOC RIGHT NOW HEY GIRL(Ale: OH HAYYYY). Anyway! I think our friendship was solidified on that gross V-day concert (gross because I later puked everywhere) because we bonded on the greatness that is (Kristen: was?) (Ale: OUCH. BURN! But true.) Mayday Parade and I knew that girl was a keeper. 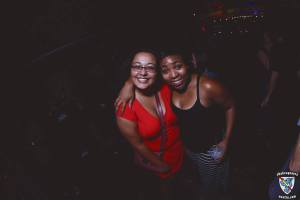 BBY PAM! Everything Pam says is true. I just would not stop talking to her until she said more than two words to me at a time! Beside a handful of decent articles, a minor bump in my writing skills, and irrational hatred for wanna be gypsies; our friendship was the best thing that happened to me while at the newspaper. We followed each other from story to story, and I probably asked her to read over my stories way too many times, but I wouldn’t change anything about how we met or our ensuing friendship: she’s awesome.

How we three became a thing (Ale’s perspective):

I think the night I truly realized these two lovely ladies were my Haley and Brooke, was St. Patricks Day 2014. We went and had drinks at The Austin Ale House (my favorite) and proceeded to go out on a rainy Monday down 6th street. We all had one too many green beers from The Dizzy Rooster, and free swag from Jameson (Pam: If any alcoholic beverage companies would like to sponsor us, we will gladly test any and all samples)  (Ale: I second that *hint hint* Angry Orchard *hint hint*) (Pam: YAS) (Kristen: I’m gonna throw Fireball into the universe mama likes) that got us into the photobooth to take that one perfect photobooth strip that is our header picture and sits in the dashboard of my car. From Kristen yelling at every bouncer asking if they were having a good night, to sitting on the roof of Shakespeare’s talking about life, it was a night I will never forget.

We now all have a mutual love for Podcasts (thanks Pam!) and group texts, that this whole blog/podcast was bound to happen. Our babble is something that I think we can all agree makes our days that much brighter. Being in Indiana and at times feeling alone, these two have been my pick me up, my Red Bull in human form.

I think Ale pretty much hit the nail on the head, but personally, I’m surprised we were not friends sooner. You’d think that after all the shows we went to together, we’d hit it off but it wasn’t until much later that we realized how well we all get along. (which to me is super ridic.) Our conversations never seem to end (in a good way) and we’re always there to pick each other up when we’re down. If our friendship were a romantic comedy, we were all the couple that were together at the same parties, but later on after chatting for a bit we realized we were meant for each other. Cue the cheesy music (preferably, “Unconditionally” by Katy P) and roll the credits.

As to not to repeat the same as these gals. I started to notice that I kept asking Pam how Ale was doing, or I would ask for an update like “Whatever happened with Ale and that one guy.” One day I asked Pam “Do you think Ale would be weirded out if I texted her about this?” (Ale: I would never be weirded out. And secretly I was asking the same questions about you.) For some context Pam had told me about some random life story of Ale’s and a few weeks later I was thinking about it and wanted an update that Pam didn’t have. But anyway, I’m not sure who started the group text, but I feel in my heart of hearts that’s what really drove us to the everlasting bond that is our friendship.

Why the hell are we doing this?

We are all extremely different, but the same in so many ways. We all embrace the awkward-ness that is life, and challenge each other to be the best we can be. I think we are three great examples of what truly is happening in the world today with young twentysomething year olds trying to make it. This our intro to who we are as a trio, a tri-pod, trifecta, perhaps? Hope you enjoyed our first Stop. Collaborate & Listen. It’s the first of many!

xoxo (Pam: *whispers* GOSSIP GIRL) (Ale: Crying laughing with ugly tears at the moment, thanks Vine) (Kristen: I want to listen to this everyday before I go to work.)